The Ohio County Public Library is modernizing a historic speech from one of Wheeling’s most notable African American leaders as part of a larger project to boost civic empathy in the region. It’s an updated version of a speech heard on Wheeling airwaves in 1936, advocating for the town’s “Twentieth Man.” 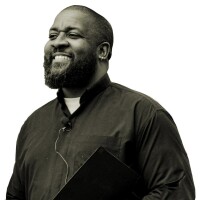 “In February of 1936, about one in every twenty persons living in Wheeling was of African descent,” Wheeling YWCA Cultural Diversity and Community Outreach Director Ron Scott, Jr. recited at the beginning of the speech. “Today, in 2022, the population of Wheeling is 27,052. Of that number, 1,435 are Black or of African descent. Which is 5.3 percent — or one in 20.”

The library is using the speech to teach patrons about the meaning of being a good citizen, and why looking back at local history matters in the present day.

The project began as part of a larger undertaking based out of the John Heinz History Center in Pittsburgh, which has 150 affiliates across Pennsylvania, West Virginia and Ohio. Program manager Robert Stakely said it’s a way to teach students across the tri-state area about their local history.

The original speech, broadcast on WWVA in Wheeling 86 years ago, was made by Harry Jones, Wheeling’s only African American attorney at the time. Library Director of Programming and Local History Sean Duffy said it discussed how the local Black community had been affected by Jim Crow segregation to a mostly white audience.

“He spoke very plainly about the fact that there were no jobs for Black people through white owned businesses, there were no opportunities,” Duffy said.

He reasoned that showing off the speech could help people empathize with the African American experience during the 1930s by providing it through the exact words of someone living through that period.

“I thought immediately this would fit the paradigm so that when kids today look at what happened in 1936, and then reflect on how things are now, what’s gotten better? What things are still the same?”

Today, the percentage of African Americans living in Wheeling is roughly the same: one in 20. The rewritten speech by Ron Scott, Jr. calls for local support of Black businesses and the uplifting of Black professionals, the amount of which have both declined in the area since 1936. Scott said he was expecting this version of the speech to just be a look back at the past, but that wasn’t quite the case.

“We found out by doing the speech that a lot of things are just viewed differently, or dressed in different clothing so that it looks like it’s different,” Scott said. He noted how the framing of these issues in a modern light could help people who take interest in the project to make a shift in viewpoint from sympathy to empathy.

“What we’re used to are folks saying, ‘Well, that was a shame that, that happened,’” Scott said. “And now we’re getting folks into saying, ‘Well, how is that still affecting things?’ Or, ‘How can I do something to lessen the blow?’”

The original speech has been lost to history — local engineers theorize it was recorded to an acetate disk, which could have been destroyed in one of the radio station moves over the years, or just wasn’t saved. But Scott said the meaning of the speech lives on, even a century later.

“He’s making sure that he gets this message out, but in a way that is kind of welcoming at the same time, telling you, ‘This is what it’s like for us. Don’t you want to know?’” Scott said.

The full recording of Scott’s speech is available through the WALS Foundation on SoundCloud. A transcript of the original 1936 speech is available to read on the Ohio County Public Library’s website, as well as more information about the Civic Empathy Through History Project.

Justice, Officials Cut Ribbon On I-70 Bridges Project In Wheeling

The $215 million project rehabilitated or replaced a total of 26 bridge structures on one of the oldest sections of interstate highway in West Virginia.