Home » Listen: Del McCoury Band Has Our Song Of The Week From 2013

Listen: Del McCoury Band Has Our Song Of The Week From 2013

This week’s special archive edition of Mountain Stage looks back to our 30th season for a show recorded in 2013 with legendary bluegrass mainstays The Del McCoury Band. Jam-grass mega star Keller Williams does a set backed by The Travelin’ McCourys, who released a collaborative album called Pick.

The show opens with a duo performance from Mandolin Orange, who now perform as Watchouse, as they made their first appearance on Mountain Stage. Sarah Lee Guthrie & Johnny Irion were also there, with songs from their 2013 release Wassaic Way, and they even bring out their daughters Sophia and Olivia to join them on a couple songs. We’ll also hear the slyly humorous Susan Werner perform a set of tunes from her album Hayseed, accompanied by The Mountain Stage Band and West Virginia based dobro player Chris Stockwell.

Our Song of the Week comes from Bluegrass legend Del McCoury and his band, and appears on Old Memories: The Songs of Bill Monroe, released in 2012. The album is a tribute to the Father of Bluegrass Music Bill Monroe, whose band Del McCoury played in as a young musician. It was Monroe who asked McCoury to switch from playing banjo to guitar. “I used to have to sing this song every night with him,” McCoury said of our Song of the Week, “In Despair.” 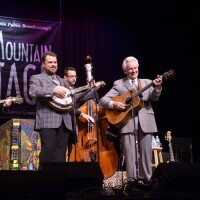 Join us on these NPR stations starting Friday Nov. 25, and be sure to check out our Upcoming Live Shows so you can make plans to be a part of our live radio audience.

LISTEN: James McMurtry Has The Mountain Stage Song Of The Week From Our 'Love' Special

This week's episode of Mountain Stage touches on that greatest of subjects - love. We approach the topic in four parts, with performances by Robert Cray Band, Rhiannon Giddens, Adia Victoria, Emmylou Harris and more.