Until the Elk River Chemical Spill in Charleston, West Virginia, lead poisoning in Flint, Michigan and just recently weather-related infrastructure disasters in Texas, not many Americans thought about what runs through taps, or the people who help to service and treat those systems. Water and wastewater operators have flown far under the radar for years but a new apprenticeship program is hoping to address some of the issues across the country.

Within the rural municipal utilities in Appalachia and across the country, water and wastewater operators hold the mechanical, logical, and historical knowledge of the local water and the systems.

Up to half of workers in the water and wastewater field are expected to retire within the next 10 years, according to the Brookings Institute and a report from the Water Research Foundation in 2010 called the Water Sector Workforce Sustainability Initiative.

“Especially in West Virginia, you’ve got a lot of baby boomers that were operators and have done a great job over the years,” said Todd Grinstead, West Virginia Rural Water Association Executive Director, “and so we’re going to lose a lot of institutional knowledge just by those folks retiring. So it’s important for us to try to get new people involved.”

The wave of retirements is expected to create a shortage, which could magnify the already difficult situations in many central Appalachian communities.

In parts of Appalachia, running out of drinking water at home is a way of life. Many of these challenges emerged when coal companies pulled out.

Often people in Appalachia are resourceful and do what they have to in order to get water into homes. Some communities engineered a system to use water from an abandoned mine. For centuries, some of these communities have depended on neighbors to do maintenance and treat water, often as a volunteer.

”The money has to come from somewhere to be able to pay these folks,” Grinstead said. “I don’t know what the magic answer for that is but it does happen. It’s our desire to add more operators to the field. Hopefully there’ll be enough eventually to get moved around and these smaller systems can hire somebody that’s certified that can do the job and do it correctly and those safely.”

In 2019, a study from the University of North Carolina School of Government suggested that one way to address the shortage is through apprenticeship or training programs.

The National Rural Water Association created a program meant to preserve institutional knowledge of the systems. 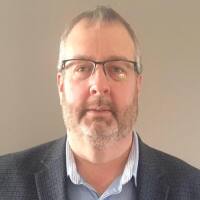 “We are proud to say that we now have six apprentices ready to start the program this year,” Grinstead said.

Josh Adkins is the first apprentice in the program in Tennessee.

Adkins is from Scott County, about an hour north of Knoxville in Appalachian Tennessee. Pioneer is a place where jobs can be hard to come by.

“We have a Walmart, that’s pretty much the extent of our little town,” Adkins said, “Other than that, you know, it’s just, it’s home. It’s all I know.”

He didn’t start his career in the wastewater industry. In 2016, Adkins graduated from Tennessee Technological University with a bachelor’s degree in interdisciplinary studies. He wasn’t sure what he was going to do with his education, he just knew that his mom insisted that he got an education.

“So I really didn’t have a choice to first go around,” Adkins said. “I got my associate’s degree in radiologic technology.”

Adkins got a job as a radiologic technician driving an hour to work.

“I liked it at the time, but it didn’t really work out with my family,” Adkins said. “I wasn’t able to get part-time or full-time status. Some weeks, I’d only get to work four hours a week, and driving an hour each way to get there it didn’t really pay out.”

He went back to school to get his bachelor’s degree hoping that he could make more money. With a young family, his main priority was staying close to home. So he dropped off his resume at the town of Huntsville, about a 15 minute drive from Pioneer,

“One day, they called and said, if you’re still interested in working, we have a position open,” Adkins said.

Adkins began work as a collections system operator in August of 2020. Shortly after he started, he was paired with a mentor who had about 30 years experience. For Adkins it meant he could make money, while learning the trade. He’ll spend about two years or 4,000 hours on the job.

“The benefits to learning on the job is getting the hands-on training,” Adkins said. “That’s more of how I learn.”

Adkins will also need up to 318 classroom hours to complete the program. This will help prepare him to pass state certification tests. Without the job, he says there’s no way he could have left the workforce for more training.

Tennessee is the 29th state to adopt a version of the National Rural Water Association Apprenticeship program.

Kevin Byrd is the workforce development coordinator for Tennessee Association of Utility Districts, which provides technical support to utilities across Tennessee.

“These apprenticeships will change how our operators look .. and the kind of knowledge that they will have,” Byrd said.

That institutional knowledge comes from master or mentor operators who know their systems and any particular quirks of their region.

“From facility to facility, the water chemistry changes,” Byrd said. “He would have an experienced knowledge that there’s something that occurs here naturally or hopefully not unnaturally at a certain time of the year and I need to change the setup of the facility to address that. He can impart that immediately without months or years of trial and error.”

“You know, if we let those folks just walk out the door without sharing what they have learned and experienced and become subject matter experts in for 30 or 40 years, then, you know, shame on us for letting them go,” Walton said.

She says the program is also a tool to recruit a new generation of water and wastewater workers.

“It is an occupation that young people don’t even really know about, for the most part,” Walton said.

The pay isn’t bad. According to The Occupational Information Network the median wage for water or wastewater operators is almost $23 an hour or about $48,000 per year. Walton says that operators in urban areas usually make more.

Certification in Tennessee and across the country is a chicken and egg situation. Along with a high school diploma or GED, workers must also have at least three months experience at a small water system and even more time on the job for higher grade operators.

The NRWA Apprentice Program is intended to be one way to formalize the employment pathway, and increase the level of professionalism in the industry.

“Certification doesn’t have a lot of uniformity across the nation,” Walton said. “This was an opportunity to kind of have a structured systematic training that is similar or the same across the nation.”

Enticing a new generation to pursue this career, can be tough, Walton says.

“It’s not, hey, I’m going to be the next Facebook creator, I’m going to work with my laptop sitting on a beach, kind of a job that, you know, youngsters seem to want more and more these days.”

Apprentice Josh Adkins says that reaching his generation could mean a better explanation of the work and its importance.

“I wish people had a better understanding of how wastewater really went,” Adkins said. “It’s a hidden world, no one really understands.”

“When I got into it, and started telling people what I did and what I was going to be doing, they’re like, oh, no, that’s terrible,” Adkins said. “But it’s really what you make of it.”

Firefighters and police officers are often celebrated as champions of rural communities. But Walton says that given how critical water and wastewater systems are to the basic functioning of communities, the industry’s workers deserve the same respect.

“We’re kind of unsung heroes,” Walton said. “We don’t stand on the rooftop shouting about what we do. Most of what we do is underground, and it’s really not seen by the general public.”

A few of these jobs might disappear after operators retire. The U.S. Bureau of Labor Statistics expects a slight decrease, about 4 % by 2029, in the need for water and wastewater operators because of advancing technology in automation.

“There never will be a large quantity of jobs available in rural and small systems in any case,” Shannan Walton with the National Rural Water Association said, “but it remains a great opportunity for service-minded people to make a real difference in their own community.”

There are 31 states that have registered apprenticeship programs through the NRWA, and approximately 260 apprentices registered nationwide. The EPA also provides a source for workers looking to break into the industry.

Kentucky has adopted an apprenticeship program with support from the RWA. The first Kentucky apprentice is based in Sacramento, Kentucky.

On this episode of The Legislature Today, there have been a number of health-related issues discussed this legislative session – from gender-affirming care, to PEIA coverage and foster care. For this week’s reporter roundtable, Chris Schulz speaks with WVPB’s Appalachia Health News Reporter Emily Rice and Allen Siegler from Mountain State Spotlight.

Allowing nurse practitioners to provide a broader range of care can improve health outcomes in underserved rural and minority communities according to a new WVU study.

It was the first time medical experts testified on a bill that would restrict gender-affirming treatments for transgender youth.