Home » Listen: Nefesh Mountain Has The Mountain Stage Song Of The Week

Listen: Nefesh Mountain Has The Mountain Stage Song Of The Week

Since their arrival on the scene in 2015, Nefesh Mountain has been hailed as one of today’s formative boundary pushing Bluegrass/Americana bands. They’re among the first to truly give voice and openly represent Jewish American culture, tradition, values and spirituality in the world of American roots music.

On this week’s broadcast, Nefesh Mountain performed songs from their critically acclaimed latest, Songs of the Sparrow, and our Song of the Week, the band’s “A Mighty Roar,” which appears on their album Beneath The Open Sky. 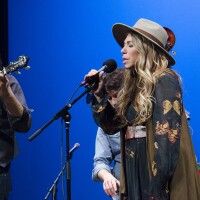 This show also features a special performance from our host Kathy Mattea, who performs her version of “Turn Off The News (Build A Garden).” The song was written by Lukas Nelson and Kathy released it as a single earlier this year.

Join us on these stations starting this Friday, Dec. 23, and thank you for making Mountain Stage a part of your holiday weekend.