Home » Listen: Loudon Wainwright's 'Suddenly It's Christmas' Is Our Mountain Stage Song Of The Week

Listen: Loudon Wainwright's 'Suddenly It's Christmas' Is Our Mountain Stage Song Of The Week

This week’s premiere broadcast of Mountain Stage was recorded in Boston, Massachusetts at the invitation of the Celebrity Series of Boston in the Berklee Performance Center, with thanks to our affiliate WUMB.

The show features some of America’s preeminent and sought after writers; Rosanne Cash and her band perform a special extended set, and we hear from the legendary Loudon Wainwright III.

We also hear from a singer, songwriter and guitarist who made her name in the Boston area — Ali McGuirk, whose new album is called Til It’s Gone. The show opens with modern bluegrass greats Molly Tuttle & Golden Highway, who have been nominated for two Grammy awards at next year’s ceremonies, including Best New Artist. 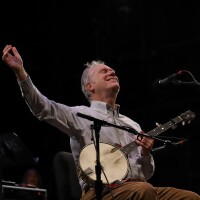 Our Song of the Week is a timely one as we are fully entrenched in the holiday season. “Suddenly It’s Christmas,” written and performed by Loudon Wainwright III, originally appeared on his 1993 live album, Career Moves. Though the song is approaching 30 years old, the sentiment could be seen as more relevant now than ever.

Be sure to join us on one of these public radio stations to hear the entire show, and be sure to let your station know you appreciate hearing Mountain Stage every week.